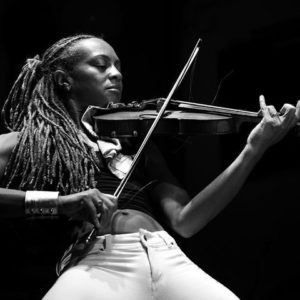 Roots Music is an expressive art form, and nowhere can you find a more expressive musician than the mystic violinist Anne Harris. Rolling, blending and folding in a variety of musical influences from Celtic to Americana to Funk, she embodies a musical genre-morphing sound that is all her own. Anne is an internationally recognized instrumental talent that has captivated audiences around the globe. Her command of the stage is punctuated with a free reeling and coiling whirlwind of sound and visual excitement. Her gypsy-like stage presence is truly unforgettable and revolutionary in the ever expanding musical world that surrounds her.

The beauty of Anne’s ability to play the violin while dancing as gracefully as a swan and as powerfully as a shaman, moved me to joyful tears. Bearing witness to her performance left me completely awestruck and mesmerized. At times, she moves with a gentle ease, and then with sudden and wild abandon. Surely, it follows suit that she has had extensive training, but it appears to just spring naturally from her solar plexus. To watch her perform is hypnotizing. It was pretty much all I could talk about for several days.   ~ By Julie Jenkins 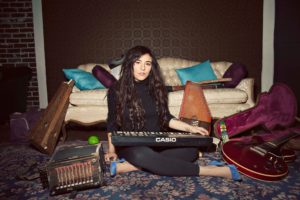 Wielding the torch of a veritable Creole dynasty, being born into one of the first Creole families to settle in St. Landry Parish, Marcella has now planted the seeds of her South Louisiana heritage deep into the bluffs of Memphis, TN — no small victory for a young woman just now rounding out her mid-20s.

Simien is a natural in the truest sense.  Daughter of two-time GRAMMY award winning Zydeco luminary Terrance Simien, she was practically born onstage, and grew up thoroughly immersed in sound and performance.

Yet, despite her almost fairytale-like upbringing, Marcella makes it her mission to forge her own pathways in the music business.  A graduate of the prestigious Memphis College of Art, Simien boldly follows her heart.  Her music is a dueling hybrid of classic Memphis soul and the freewheeling swagger of New Orleans funk, woven together with the sighing laughter of her ancestors: that Creole accordion. She likes to say that she’s, “Louisiana born, Memphis braised !”

As outspoken and courageous as she is sensual and feminine, Simien holds a wisdom far beyond her years.  With each honeyed undertone, every saintly holler, with each tinkle of the keys, and every pump of the squeezebox, she reinvents the mold and soldiers against boundaries, yet she never fears to respect tradition.

Simien is one of the most soulful artists I’ve heard since the ‘glory days’ of Memphis soul music. Her sound and stage presence are constant reminders that soul music is still alive and well.   ~ Lawrence “Boo” Mitchell

Marcella Simien heard it all as a youngster, no doubt, and once she doubled-down with the Memphis sound, she found a totally striking new attack on Southern Soul.  ~ Bill Bentley

Guy Davis: The Routes of Americana 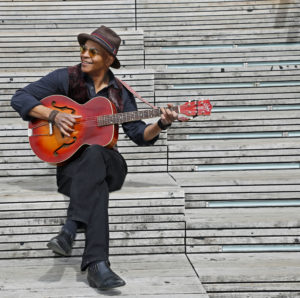 Guy Davis has spent his musical life carrying his message and music around the world, from the Equator to the Arctic Circle, from the Plains of Kansas to the tundra of Siberia. His work as a singer, musician, actor, writer, and music teacher have earmarked him as a renaissance man of the Arts.

What music and acting have in common, he explains, “is that I don’t like people to see the hard work and the sweat that goes into what I do. I want them to hear me and be uplifted.”

Davis’ much-praised 1995 debut, Stomp Down the Rider, on the legendary singer-songwriter label, Red House Records, marked the arrival of a major talent, earning acclaim for his deft acoustic playing, his well-traveled voice and his literate yet highly accessible songwriting.  He’s barely rested since then, taking his music to television (The Conan O’Brien and David Letterman shows) and radio (Mountain Stage, World Cafe, E-Town, Woodsongs), as well as performing at theaters and festivals around the globe.

He played the Ukraine in summer of 2014, just a week or so before the statues of Lenin were torn down. He even played for the visiting Queen of Denmark when he performed at a children’s home in Greenland. “I feel like I’ve only hit three corners of the world, with a lot more to go,” Davis says.

Truth be told, there just aren’t many who can deliver Americana in as interesting and entertaining a manner – or give acoustic traditional blues such a contemporary sound – as Davis, and it sure is a lot of fun hearing him explore the different sides of the genre. ~ The Blues PowR Blog

He has got a voice like Howlin’ Wolf dipped in honey. He is also an enchanting storyteller, able to deliver a shaggy-dog story while barking and simultaneously making train noises on a harmonica – a reminder of a time when the phrase “novelty song” didn’t necessarily have music-lovers running for the exits. He utilized ye olde food/sex metaphor in “Home Cooked Meal” and made it sound dirtier than you would have thought possible. He is fabulous. ~ The Scotsman

As we all know, times are hard right now as we work our way through surviving in this pandemic. Being independent musicians whose ability to perform live, our life-blood,  has been all but halted, all manners of support are needed and welcome.

If you would like to help us weather this storm and support our work, we would be very grateful for any contributions to our tip jar. In keeping with Creole traditions of throwing whatever you’ve got into the pot to create a tasty treat, we hope you might consider supporting our efforts to spread the joy of music.  We were really just getting started, and were looking forward to a summer full of fun festivals around the globe. We miss you all so much!

Be sure to visit our Store, as well, for some other treats. Thank you, and be safe out there! Click on the yummy looking pot of gumbo above to make secure a donation via PayPal. We are forever grateful for your love.

Thank you,
Anne, Marcella, and Guy