I made this recipe for 50 people, sample size servings 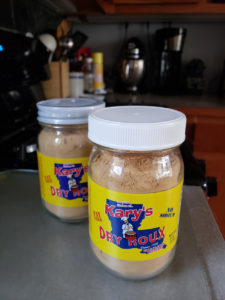 Seasoning: Sea Salt, Garlic Powder, Onion Powder & Tony Chacere’s Seasoning Blend
– Olive Oil
– 2 onions
– 2 lbs. of smoked sausage (Andouille is preferable)
– 8-10 Organic Chicken Thighs with skin and bone in and skin on (This is just a preference for flavor… but people need to warned that there are bones in the dish… if you don’t wanna mess with that liability then they don’t have to be bone in)
– 1/2 carton of Chicken broth (optional, for additional flavor, but the natural juices of chicken and sausage can be enough too)
– 8-10 cups of water
– 2 bundles of Green Onions
– 2 bundles of Parsley
– 3/4 jar of Dry Roux
-1 – 2 bags of rice

– Take Chicken thighs out
– put Chicken in the pot first
– put enough seasoning to cover all the chicken – liberally
– mix it all together
– put a little Olive Oil
– Begin to Brown the chicken
– Let it begin to cook
– put a lid on the pot
– Chop your onions up fine, diced
– uncover lid
– Add onions to the pot of chicken – Add a little bit of water
– Stir it so chicken doesn’t stick to bottom of the pot
– It begins to make it’s own gravy/broth first

– Wash your rice
– 4 cups of rice to 4 cups of water for cooking in a rice cooker.
– COOK SOME RICE – the gumbo is poured over a scoop of rice- in each serving.
But the gumbo can be served without rice as well. Some people just like the gumbo by itself and that works too. (Brown rice is heart healthy and we dig that, so I’d go with Brown Rice if I had to choose. But white rice works as well).

– Bring milk, water, and salt to boil in heavy bottom pot
– Gradually add cornmeal while stirring constantly
– Lower heat to simmer and cover with lid, stirring every 3-5 minutes to keep from sticking to the pot.
Cook for approximately 20 minutes, or until grits are creamy
Remove from heat and stir in butter and pepper
If adding cheese, whisk in and serve immediately.

My grandpa’s name was Ed Wallace. He was my mom’s dad. Back in the 1930s, after being fired from a job, he took the name of his dead brother, Marshall Wallace, who had just been killed by the mob after not throwing a prize fight. He came back and replaced himself on the job he had just been fired from. He might not have been a law breaker, but he ran with a crowd that bent it pretty far.

He would tell my sisters and me stories about his Pullman runs, and how the kitchen crew had to keep things moving. They’d have to come up with meals sometimes in a hurry, so they would look in the refrigerator and scout around for stuff. Whatever food was left over, trimmed, picked off, cut off, pulled out, boiled down, burned, or otherwise not quite right for a dish, the crew would say, ‘Put it in the gravy.’ And that, with a little bit of Gravy Master, is what my grandfather did.

The fact is, gravy is probably one of the simplest things he made for dinner. But oh you could taste the love in it, bits and all! The stories he told are what made it great. There was no easy telling exactly what was in it. Sometimes the gravy was thin and easy flowing. Sometimes it was so thick with onions, and corn, and giblets and scrapings that you could hide a hacksaw blade in it, which would you be a good thing if Grandpa ever got locked up and needed a way out.

Every brown gravy recipe is basically a version of a simple pan gravy. The one big difference is, and folks will argue this, when making a brown gravy it is cooked in the pan that the meat was cooked in. The best gravy comes when you gather the beef fat and drippings, it’s the beginning. Yes, you can make it with just about any form of fat and a good, canned beef stock, but it just won’t be as tasty.

After you cook your roast or other beef, pour all the drippings and fat into a measuring cup or bowl. Be sure to scrape as many browned bits left in the pan as possible with the mix. We’re looking for 4 Tablespoons of fat AND 2 cups of juices here. Don’t worry if you don’t get that much, it’s the ideal. You can still get a hearty flavor from as little as a tablespoon of fat and an 1/8 cup of the juices.

Measure out 4 Tablespoons of beef fat. If you don’t have that much, add enough vegetable oil or canola oil to make 4 tablespoons.